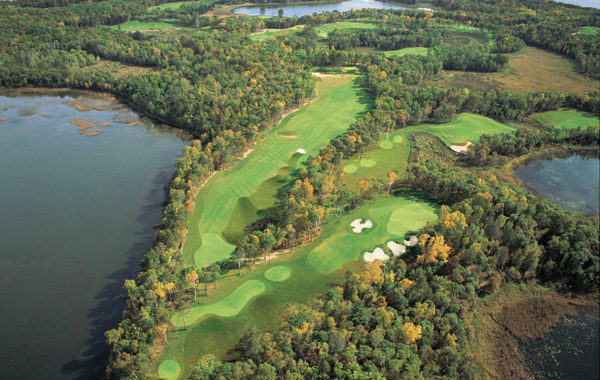 In the center of the state of Minnesota, the heart of local golf beats is where numerous excellent resort courses are located. For many decades, Minnesotans have traveled to the central region of the state to relax at the many lakes and golf at the high-end resorts. One of those resorts, historic Breezy Point, has been helping guests relax and enjoy themselves for more than 90 years.

Located in Breezy Point, Minn., the beautiful Breezy Point resort rests on the shores of Pelican Lake and is a year-round destination for vacation fun as well as weddings and conferences. Home to four different restaurants and multiple luxurious lodging options, Breezy Point attracts people from all over the Midwest.

Built in 1921 by millionaire publicist Wilfred Hamilton Fawcett, Breezy Point has attracted the rich and famous since the Roaring 20s. The likes of Clark Gable, Carole Lombard, Tom Mix and Jack Dempsey have made it to Breezy. Fawcett built a large lodge using massive Norway pines (some of which were more than 70 feet in length) and the lodge has been preserved and is listed on the National Register of Historic Places.

These days, golf is a major attraction for Breezy Point Resort. With three 18-hole courses, it is a hot spot for Twin Cities golfers making the trek up north. But the original course, known as The Traditional (opened in 1922), has seen its share of bigger names walking the links, including Patti Berg, Les Bolstad and Walter Hagen. Known as a shot-maker’s course that measures 5,192 yards, the Traditional puts a premium on accuracy over distance.

Whitebirch Course was built in 1930 and became the first championship golf course in the Brainerd Lakes Area. At 6,704 yards, it is a greater challenge than the Traditional. With lush fairways, large undulating greens and multiple tee boxes, Whitebirch is a great challenge in a beautiful north woods setting.

Things jumped up another level when Breezy Point took over management of Deacon’s Lodge Golf Course (originally built in 1999). Deacon’s Lodge, an Arnold Palmer design that was named after his father, rolls through the surrounding lakes, woods and wetlands and was named one of America’s Top 100 Courses by Golf Digest and Golf magazine.

Deacon’s Lodge is just a feather in the cap of a resort that includes three 18-hole golf courses, a boat marina, ice arena, four restaurants, four bars, recreation center and rental accommodations with approximately 250 rental units ranging from hotel rooms and suites to condos and multiple bedroom cabins. There are few better ways to spend some leisure time than at historic Breezy Point Resort.

With winter chills still hanging in the air, it can be hard (yet heartening!) to…

In Pequot Lakes, MN – just north of Brainerd in the Central Lakes region of…

Plan a Trip to the Brainerd Golf Trail

After a psychotic spring, it would appear that the wild and wacky Minnesota spring is…