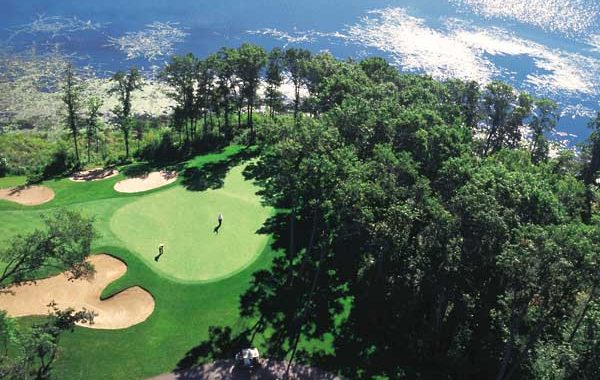 When talking about golf destinations, Minnesota doesn’t always come up at the top of the list. Golfers often think Florida, Myrtle Beach, Arizona or even Vegas before they ever consider Minnesota. But there are plenty of reasons why you should make Minnesota your next golf destination—and chief among this great golf.

Minnesota is golf crazy. In the annual ranking of states with golfers per capita, Minnesota always ranks at or near the top. As a result, the high number of golfers demands a variety of courses to play—and courses with great conditioning to boot.

Minnesota has more than 500 courses throughout the state, and they range from the small mom-and-pop gems hidden in some undiscovered corner of the state to high-end, well-conditioned courses that will challenge anyone’s game.

The state’s geography lends itself to a variety of golfing beauty and brawn. The 10,000 lakes, some of them know as lateral hazards, often have a beautiful backdrop (Lake Superior) when they aren’t being used as a forced carry (Sabin Lake on Hole No. 17 at the Legend at Giants Ridge).

Minnesota certainly has its glacial plains in the middle of the state, but much of the land is rolling and many courses’ elevation changes will take a new golfer by surprise. Superior National up north is built into the side of a mountain overlooking Gitchegumee, while down in the Twin Cities, The Wilds has some elevation changes that should require a seatbelt in the golf cart.

There are woods in Minnesota. As you travel north out of the Twins Cities, the trees begin to encroach like a tight fairway. The sounds of the city melt away and the quiet of the north envelops you like a warm comforter. The only sound you hear is the rush of flowing creek or the yelp of a birdie putt two fairways over.

If it’s golf history you want to challenge, Minnesota has plenty to offer. Among the private clubs, Hazeltine National Golf Club will be home to the 2016 Ryder Cup and has already compiled several major championships. Interlachen Country Club and The Minkahda Club are two more members of the former-major-host list.

Over in St. Paul, the municipal Keller Golf Club, hosted golf legends in major tournaments from an era gone by. Two PGA Championships (1932 and 1954) and two former tour stops (the St. Paul Open and Patty Berg Classic) were once held there. The club reopens in 2014 after receiving a nice facelift and a brand new clubhouse to display its storied history—it should be on the list of any golfer interested in the game’s past.

Perhaps the biggest fallacy about golf in Minnesota is that it has a short season.  The saying goes in Minnesota there are two seasons, winter and road construction, but when it comes to playing the game, golf-obsessed Minnesotans get out more often than you would think. Even the legendary Arnold Palmer, who has designed golf courses in the state (Deacon’s Lodge and TPC of the Twin Cities), knows differently:

“There is a misconception that the season is so short,” Palmer once said. “But, if you don’t mind a little cool weather, you can get seven months of golf in and there are not many places in the U.S. where you can play golf longer than that comfortably. So it doesn’t surprise me that Minnesota is becoming a golf mecca.”

If you come to Minnesota to play golf in the late summer, early fall, the truth be told is that there are few better places to be on earth at that time for the game. The courses have reached their peak condition and the weather is perfect. Which is just one of the many reasons that Minnesota should be your next golf destination.

Ask the Pros: How to Improve Your Mental Golf Game

Three Minnesota Golf Courses that will Test your game

Golf Exercises to Get You Ready For The Season

With apologies to Gary Player, the golf fitness trend really took off with Tiger Woods.…