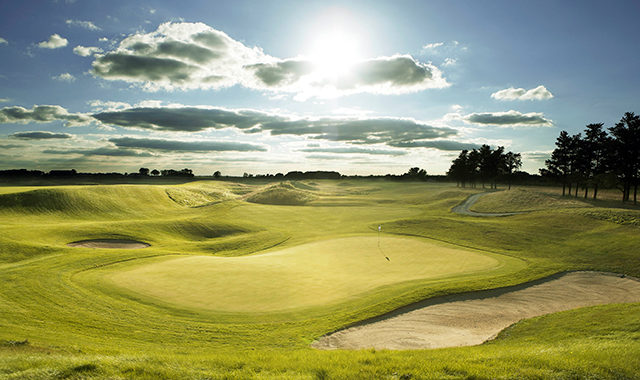 The Hidden Gems of Minnesota Golf

There are a number of golf courses that grab attention when you mention Minnesota golf courses. Tracks such as the resort courses in Brainerd, the Minnesota Trilogy up north and all the historic courses in the Twin Cities where big-time national tournaments have been played are well known. But Minnesota is home to many great courses, so take a look past the notables and you will come across several Minnesota golf finds that are well worth your attention.

Three great courses located just outside the Twin Cities are Geneva Golf Club in Alexandria, The Territory in St. Cloud and The Jewel Golf Club in Lake City. They are not too far from the big city amenities, but far enough away to find golf in a quiet, rural setting, where you can easily focus on the game.

Prolific Minnesota golf course architect Joel Goldstrand designed the public 27-hole championship course of Geneva Golf Course in the scenic Alexandria lakes area. Geneva has three separate nines: The Ponds, Island and Marsh courses—each with its own unique characteristics. Opening in 2000 with 18 holes, the third nine were added in 2002.

The woods and water of the area frame the course in both beauty and challenge, with enough open land for wind to affect play. With a slope/rating as high as 137/75.3 (on the Marsh/Island 18), the course will put up plenty of fight to any golfer looking for a new challenge.

Heading south of the Twin Cities to Lakeville, you can’t go wrong with a loop of The Jewel. Considered one of Minnesota’s hidden gems, The Jewel is found near completely different land formations (from Geneva and The Territory) at the foot of some of Minnesota’s beautiful river bluffs. The towering bluffs are a perfect backdrop to an unsurpassed golf challenge.

Designed by two-time U.S. Open champion Hale Irwin in 2006, The Jewel winds throughout 800 acres of the river valley and has garnered plenty of attention in its own right. In 2013, it was rated No. 3 of the Best Courses You Can Play in Minnesota by GolfWeek magazine. Plus, The Jewel received the 2013 Tee Times Magazine Reader’s Choice Award for “Best Course Conditions” in the state of Minnesota.

The trip is worth the effort to get on any of these three great Minnesota golf finds. Make the trek today and reward yourself with some fantastic golf in some of the most beautiful settings in Minnesota.

If you live in the Twin Cities of Minneapolis and St. Paul you know the…

In Town for a Twin’s Game? Set a Tee Time While You’re Here

Baseball is a great sport, perfect for passing the summer time in months of endless…