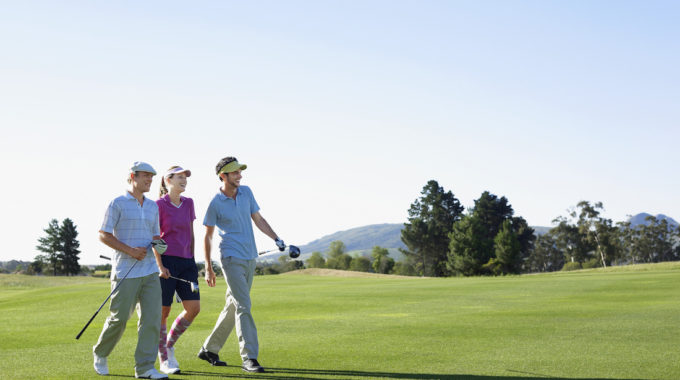 There are typically 18 holes on a golf course — some of those holes are better than others. But at most golf courses, there may be one hole that tops them all and that is the local watering hole. Most courses have a great 19th hole in the clubhouse, which is perfect for every kind of post-round beverage. But if you are looking for a fresh craft beer direct from the brewery’s taps, there is usually a craft brewery located not too far from the 18th green.

Minnesota, which is a great golfing state, also has a very vibrant craft brewery scene. In fact, the Twin Cities (Minneapolis and St. Paul) was recently named America’s coolest drinking city by National Geographic magazine. And no matter where you choose to tee it up in the Land of 10,000 water hazards — from Mankato to Ely you can find an excellent brewery to wet your post-round whistle. Every region of the state features great golf and numerous places to find a post-round cold one.

The golf in the Brainerd-Baxter area has become as renowned as the storied fishing lakes, and the craft beer is catching up fast. From Grand View Lodge, Cragun’s, and Madden’s on Gull Lake to Golden Eagle Golf Club, Breezy Point Resort, and Minnesota National just down the road in MacGregor, the Central Lakes region is filled with award-winning championship golf courses and fantastic amenities.

After golf, there are several excellent craft breweries to check out. Gull Dam Brewing and Big Axe Brewing in Nisswa each have a full complement of beer styles and great tap rooms for spending a little time. In nearby Baxter, the Roundhouse Brewery and Jack Pine Brewery are there for the sampling. Roundhouse came on line with its railroad themed beers and tap room in 2016, and Jack Pine just opened a shiny new tap room last year.

If you are heading way up north to the Iron Range to play golf at the great courses of Wilderness at Fortune Bay in Tower, Giants Ridge Golf & Ski Resort in Biwabik, Black Bear Golf Course in Carleton, or Superior National Golf Course in Lutsen, you will never wait for an award-winning craft beer. Duluth is loaded with craft breweries and is a beer destination all on its own. Lake Superior Brewing Co., Fitger’s Brewhouse, Bent Paddle Brewing Co., and Hoops Brewing Co. are all located in Duluth.

If you are coming off the recently renovated Superior National course, check out the Voyager Brewing Co. just a little north on the road in Grand Marais, or Castle Danger Brewery in Two Harbors if you’re heading back south. Just like all the Iron Range golf, the beer at these breweries is memorable and worth the trip.

Head out west to the great golf courses of St. Cloud and Alexandria, and you will find great brewery options to go with it. In St. Cloud, Territory Golf Course offers an excellent blend of Scottish links and traditional forested golf holes while the area offers a terrific blend of craft beer options. Beaver Island Brewing Co., The Pantown Brewing Co., and Urban Lodge Brewery sell great beer, and you can get a delicious meal at the Urban Lodge, too. Beaver Island has forged a great reputation in the craft beer community and Pantown is the new kid on the block, opening its taproom in 2017.

Arrowwood Resort Alexandria and Thumper Pond Resort in Ottertail are well known for the challenge of their tracks and the amenities of their facilities. But if you’re thirsty after your round, the great brews are pouring at Copper Trail Brewing in Alex, and Disgruntled Brewing in Perham, just up the road from Thumper Pond. The beer is cold and tasty, and you won’t leave disgruntled any longer.

Finally, there is the Twin Cities area, where the golf balls are always flying and the craft beer scene is booming. We can’t list all the great breweries to be found, but we can steer you toward the nearest ones following the final putt of the day.

• Boathouse Brothers Brewing Co. in Prior Lake, near The Wilds, Legends Club, and Willingers Golf Club

Meanwhile, St. Paul is home to Flat Earth Brewing Co, Tin Whiskers Brewing, Great Waters Brewing Co. and Barrell Theory among others, and in Minneapolis, you will find Modist Brewing, Indeed Brewing Co., Dangerous Man Brewing Co., and Fulton Brewing. You can be sure that after 18 holes at a great golf course, your thirst for a cold one will be quickly and easily satisfied.

Long Drives: 5 of the Longest Holes in Minnesota

Most golfers love the challenge of a long golf hole. With today’s golf equipment that…